This years' Leadville Silver Rush weekend was setting up similar to 2011, but my expectations were a little higher after having some great success last year.  I would be racing along side my older brother Jared for the first time in a few years, which was really cool.  He and I headed up early Saturday morning and it was shaping up to be a perfect day.  But this year was quite a lot different.  Since Lifetime Fitness purchased the Leadville Race Series in 2010, their marketing and promotion has been top notch and has been continually attracting more and faster athletes.  This makes for a really cool event and those finishing times really drop fast! 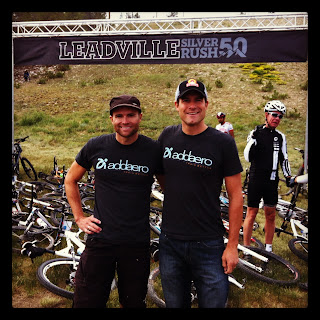 After we geared up and set the right tire pressure, we made our way to the start line.  The race series is kind enough to provide priority starting for the Leadman competitors, front and center.  But it still means we have to run and carry our bikes up Dutch Henri hill.  This does give a more dispersed hole shot for the chip timing, but takes a good amount of breath out of your lungs.  I made it through right on and was in good enough position to never worry about passing racers the rest of the day.  Just relax and do my thing.  The whole ride I really just cruised at a solid intensity, but not too hard of an effort, knowing throughout, that I would be running the same track the next morning.  The course was much rockier and some how steeper than I remembered.  Did they dump a couple truck loads of boulders to make the course more challenging? 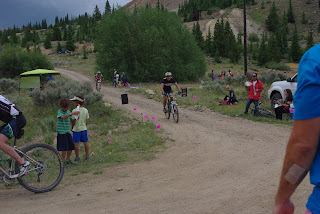 Unfortunately I passed my brother a couple times before the halfway point as he and several other riders had flat tires galore.  When I hit the turn around I was phenomenally greeted by Rocco and Sawyer just screaming and yelling, no better way to race a bike.  Nicole was snapping some pictures and smiling like always.  And along side her were my great friends Kevin and Wade, sporting the Addaero team kits and cheering like mad!

We made the turn, which now includes a wicked steep hike a bike through the chip timing.  I refueled and headed back up the course.  I was able to maintain my level of power and also keep my heart rate in check.  Kevin and Wade spun their mtn bikes to the top of climb #5 for the day and it was so refreshing to see some familiar faces again.  A quick water bottle hand off and I was on my way.  The next climb and downhill to the finish were hard, but it felt great to be able to open up the bike and have a blast to the finish line.  Crossing the line in about the same time as last year, on an extended course felt great, but my 4:40 placed me in 51st position, much lower than I would have hoped for, but 2nd in the Silver King division of athletes that were biking and running the 50 miles this weekend.
Silver Rush 50 Trail Run Race Report -

After a relaxing night in Frisco, down the hill a little ways from Leadville, I was not too pumped to set my alarm for 4 am to get to the start line.  The Silver King race is much more than covering the distance on a bike then running.  It is a mind game that gnaws at you from the first pedal stroke on Saturday morning to the last foot strike on Sunday afternoon.  Good news is that you know the race course which is great, but the bad news is that you know the course, which sucks.  Covering a 4 mile descent on a bike is a blast, but running is painful and taxing.  At the start line, I talked with Leadman competitor and new friend Troy Howard, who ended up taking my Silver King crown from 2011.  Congrats to him!  It was great to meet Troy and we actually ran together and talked much of the first climb.

I felt good the first 10-13 miles of the run race and then started to lose energy much sooner than I had planned.  And that lost energy translated into evil little demons inside of my head.  They started the chatter with thoughts of quitting and justification for quitting.  When those thoughts enter your head so early in an event, where do you go?

I kept repeating to myself that I am not a quitter.

But this race doesn't even count for the Leadman Challenge...I wouldn't be quitting anything, I could just chalk it up to a great 25 mile training run.

I had that speech rehearsed and prepared to tell Nicole at the turn around.  When I got there, my mindset was 50/50.  Should we pack up and head to Denver or suffer through to the finish.  In my head, the decision lay with Nicole and her energy and support.  As soon as I slouched over and told her I was done, she kicked me in the rear, yelled to me that we are not quitters and to get going.  Wow, I couldn't believe that.  There was no way she was letting me stop.  "How could you live with yourself?" she asked.  Not sure I even responded, but I knew that I wouldn't go down like that.
Immediately after the turn I saw new friend Jason Vieth heading back into the aid station that he just left, forgetting his water bottle and doubling back to get it.  Jason is running the 100 as well, so using this as a training run, he was really cool with lending me some much needed camaraderie and kinship.  The two of us ran together for much of the next 12 miles, getting past 2 more evil climbs and to the Printer Boy aid station.
The last road climb was just as bad as last year, a combination of power hiking and slow running, knowing that the top meant a crazy boulder downhill of 3 miles, then a 7 mile moderate descent.  Nicole and the boys made there way to the final 2 aid stations to cheer and lend support. I am so blessed with the most amazing wife and sons.  Being able to see them 4 times during the last 25 miles of this race was the main reason I had any energy and desire to make it to the finish.  When I crossed the finish line, my sense of accomplishment was so high.
I had much better success last year, added nearly 50 minutes to my time in 2012 for an 8:34 total, but battling the mind over body for almost 8 hours makes this experience even more valuable.  In an email discussion with a good friend, he sent this note, all too perfect. "Sometimes my worst races are my greatest achievements… Quitting is simply not an option but the satisfaction that comes from working through that is awesome and character building.  Finishing when you are rocking and feeling great is easy.  Finishing when you feel like you are going to die is a lot harder!!!"  - Mark Barrett   July 16th, 2012

Thanks to Mark and all the other competitors that lend encouragement and support along the race day.  In the past 3 races in Leadville I have learned a lot about myself as a person, athlete, friend and husband.  I cannot wait to tackle the 100 bike, 10k and 100 run with the same love of the mountains and competition.
Posted by Run, Motivate, Inspire at 1:13 PM